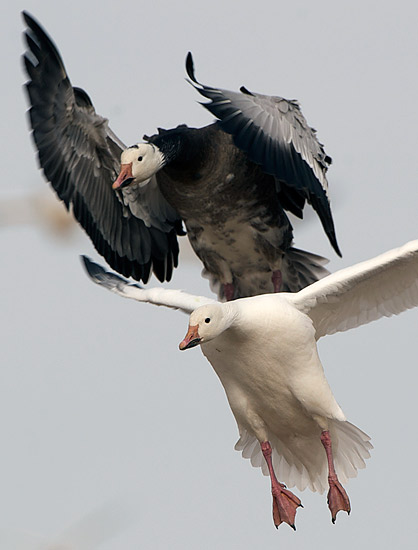 Description: The greater snow goose is a slightly larger edition of the white-phase lesser snow goose. No color dimorphism has been discovered in this race. In the field it is virtually impossible to tell these two races apart. In the hand, the larger size and longer bill of the greater snow goose distinguish it from its smaller counterpart. The sexes are similar in appearance, but the female is often smaller.

Breeding: Greater snow geese breed principally around Foxe Basin, northern Baffin, Bylot, Axel Heiberg and the Ellesmere Islands located in Nunavut, Canada, and in Greenland. They prefer to nest in colonies on well-drained westward slopes or vegetated hilltops, and females lay an average of 4 eggs.
Migrating and Wintering: Greater snow geese leave their arctic breeding grounds and migrate along a narrow corridor through eastern Canada and the northeastern United States to the mid-Atlantic coast (from New Jersey to North Carolina).
Feeding Habits: Greater snow geese are grubbers, feeding on roots, rhizomes and shoots of bulrushes and salt-marsh cordgrass. They also make extensive use of agricultural fields found adjacent to wintering areas.

Promote Your Page Too